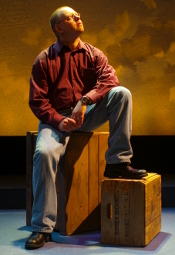 CHARLES S. REECE (Founder and Senior Designer) has worked as a designer and production manager in the Philadelphia and New Jersey region since 1994.

He was nominated for a 2004 Philadelphia Barrymore award for his design of The Woman in Black at Bristol Riverside Theatre.  Other designs range from dance and opera, to concerts and nightclubs, to corporate events, trade shows, weddings and professional sports teams. He also served as an associate designer for Pinkney Associates, a Cape Cod company specializing in lighting for trade shows and conventions.

In addition to his lighting credits, Chuck has numerous years of Production Management experience prior to launching Reece Lighting & Production, including with Bristol Riverside Theatre, Carolyn Dorfman Dance Company, APA Music & Pictures and McHenry Creative Services. He has managed a wide variety of events among them small corporate meetings, national conferences and regional and international tours.